At Yelp, we push new code live every day. Pushing daily allows us to quickly prototype new features and squash bugs in a proactive manner. Because we aim to deploy new code so often, we’re always looking for ways to make the process efficient and painless.

There are four main stages to the Yelp push process: code review, integration, testing, and finally, live deployment. Each step is important, and there are ways to maximize the efficiency of all of them.

This first stage of the push process happens before a push request is even made: all code destined for the live site is subject to a full review by at least one other developer. For more expansive changes, reviewers with relevant experience or responsibility are added to the review as well. Code review gives us a place to spot silly mistakes, suggest alternative methods of accomplishing certain goals, and ensure that we maintain uniform code standards. By involving engineers who maintain relevant portions of the code base, it also keeps them informed of what’s going on with areas of the code for which they are responsible. Furthermore, we’ve found that code review helps drive a sense of community as we discover and share tips, tricks, and lessons that we’ve encountered throughout the development process.

We use the excellent open-source Review Board to simplify the process. With features like the ability to add comments inline on diffs and compare different versions of diffs themselves, Review Board has proven itself a very helpful tool.

Yelp now uses Git for version control - we transitioned from Subversion a few months ago, but that’s a story for another blog post. Developers work in feature branches, pulling in changes from master at their own leisure. Before their code is added to a push, however, we always rebase the individual feature branches with all of the latest changes in master, to ensure that nothing conflicts with code that previously went live. In addition, each feature branch is squashed down to a single atomic commit, to make any necessary reverts easier.

When we were smaller, coordinating requests for pushing changes was handled via email. As our team grew, however, it became apparent that we needed a more central and consistent way of tracking the push process. We didn’t find any existing solutions that really fit our needs, so we developed an in-house Google App Engine app to track pending requests and the status of the current push stages - we’ve open sourced it as PushmasterApp on GitHub. The app also provides reporting functionality to make it easier for us to go back and review who pushed what, when.

With hundreds of thousands of lines of code in the Yelp repository, trying to test for regressions by hand wouldn’t just be arduous, it’d be impossible. While new features and bug fixes are verified by the engineer who wrote them, we also employ a suite of over 10,000 test cases (built on Testify, the open-source testing framework we developed in-house) to check for potential issues with a build. We also run a number of Selenium tests to test client-side functionality on the front end. 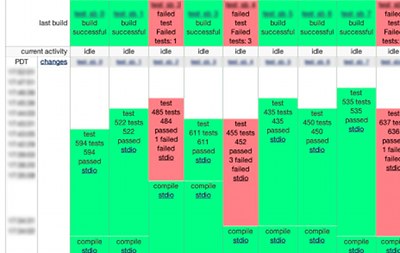 While engineers often run individual test cases or test suites in their own development environment, running the entire battery of tests would be taxing on any individual system. Instead, we distribute the process to a number of machines using BuildBot.

We maintain a set of staging servers that mirror the configuration of the live servers as much as possible. Each candidate build is deployed to the stage machines for manual verification by the developers who have changes in that push. Before we push to production, each developer and product manager must verify that their changes are present and working properly. Only after everyone involved has signed off on the build does it go live.

If a changeset causes issues, the pushmaster has two options:

Once a build is deployed to the production servers, the active version is switched over to the new build. The pushmaster and engineers involved in the push continue to monitor our error logs to make sure the build is stable. After the build has continued to appear stable for a reasonable period of time, the deployment branch is added back into the master branch, marking the new changes as the base for all future development.

While the overall process doesn’t iterate quite as quickly as, say, continuous deployment, we’ve found that it offers a good balance between build iteration time and developer involvement in testing. What we given up in speed we gain back again in being able to quickly check the kinds of changes that can be hard to write comprehensive test cases for but are trivial for a developer to verify.