One of the biggest milestones for our third Hackathon was the inclusion of the first non-engineer participants! For instance, Alex O. from our Sales Ops team joined forces with engineer Aaron V. from our Systems team and A/V tech Patrick D. to produce an unofficial Yelp song:

Of course, there were plenty of software-oriented projects as well. One team created what they dubbed “MRPig” - inspired by the concept of Apache Pig, they created a general data query language on top of Yelp’s open source MRJob framework that allows easier creation of MapReduce jobs for data analysis, with less need to involve an engineer in the process. Our product managers were excited about the possibility of having faster turnaround times on questions like, “is there a correlation between ad category determination accuracy and overall click-through rates?”

Data query languages are great, but they’re not exactly shiny. A different team of engineers created a visualization system that displayed what parts of the Yelp codebase were being actively worked in real time, by hooking into system-level events via inotify on development machines, and then piping that through a Tornado-based server to clients rendering HTML5 <canvas>-based displays. Check out some of the results: 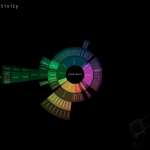 Of course, our Hackathon wouldn’t be complete without some friendly competition. In addition to the Useful, Funny, and Cool awards from previous Hackathons, this time we added a fourth category, “Bling”, for the project that had the potential to generate the most money. The awards were earned by the following projects:

We had a total of 20 teams for this Hackathon, the most we’ve ever had. Other projects included a system to defeat the paradox of choice by helping you decide where to go to lunch, a self-balancing robot built around an iPhone (that adorably cried “Malfunction!” if it fell over), and many more. While no project is guaranteed to make it all the way to the live site, don’t be surprised if some of them show up as new features in the future!