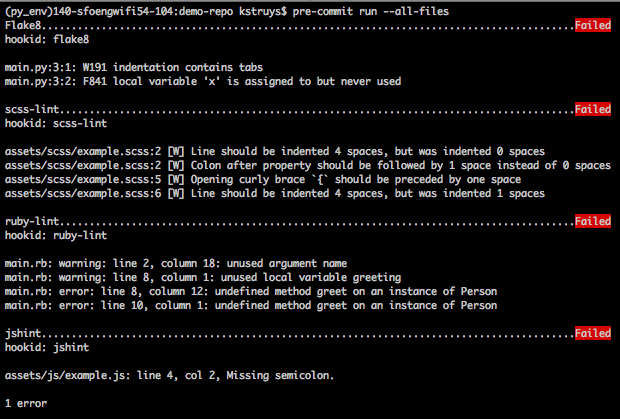 At Yelp we rely heavily on pre-commit hooks to find and fix common issues before changes are submitted for code review. We run our hooks before every commit to automatically point out issues like missing semicolons, whitespace problems, and testing statements in code. Automatically fixing these issues before posting code reviews allows our code reviewer to pay attention to the architecture of a change and not worry about trivial errors.

As we created more libraries and projects we recognized that sharing our pre commit hooks across projects is painful. We copied and pasted bash scripts from project to project and had to manually change the hooks to work for different project structures.

We believe that you should always use the best industry standard linters. Some of the best linters are written in languages that you do not use in your project or have installed on your machine. For example scss-lint is a linter for SCSS written in Ruby. If you’re writing a project in node you should be able to use scss-lint as a pre-commit hook without adding a Gemfile to your project or understanding how to get scss-lint installed.

We built pre-commit to solve our hook issues. It is a multi-language package manager for pre-commit hooks. You specify a list of hooks you want and pre-commit manages the installation and execution of any hook written in any language before every commit. pre-commit is specifically designed to not require root access. If one of your developers doesn’t have node installed but modifies a JavaScript file, pre-commit automatically handles downloading and building node to run jshint without root.

Read more about pre-commit at: http://pre-commit.com