Being able to easily find what you want on Yelp is a critical part in ensuring the best user experience. One thing that can negatively affect that experience is displaying duplicate business listings in search results, and if you use Yelp often enough, you might have run into duplicate listings yourself.

We constantly receive new business information from a variety of sources including external partners, business owners, and Yelp users. It isn’t always easy to tie different updates from different sources to the same business listing, so we sometimes mistakenly generate duplicates. Duplicates are especially bad when both listings have user-generated content as they lead to user confusion over which page is the “right” one to add a review or check-in to. 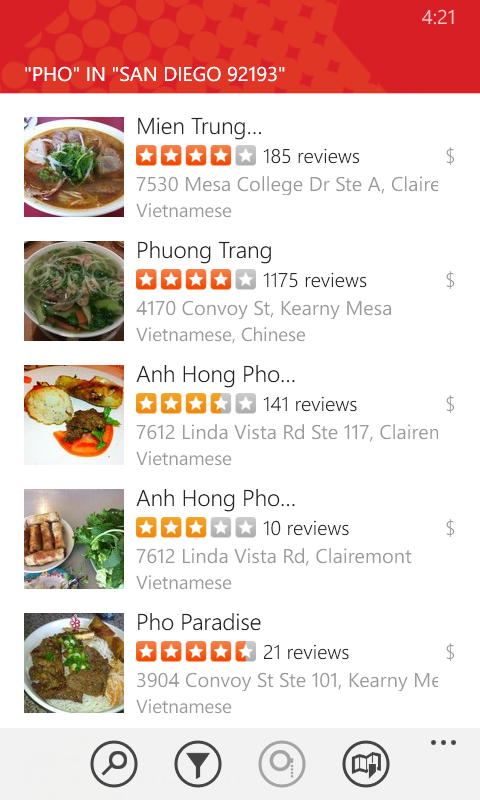 The problem of detecting and merging duplicates isn’t trivial. Merging two businesses involves moving and destroying information from multiple tables which is difficult for us to undo without significant manual effort. A pair of businesses can have slightly different names, categories, and addresses while still being duplicates, so trying to be safe by only merging exact matches isn’t good enough. On the other hand, using simple text similarity measures generates a lot of false positives by misclassifying cases like:

The first step in our deduplication system is our Business Match service. Using a wrapper over Apache Kafka, every time a new business is created or a business’s attribute is changed, a batch that consumes messages published to the new_business and business_changed topics calls Business Match to find any potential duplicates of the affected business above a relatively low confidence threshold. Business Match works by taking partial business information (such as name, location, and phone) as input, querying Elasticsearch, reranking the results with a learned model, and returning any businesses that the model scores above a scoring threshold. If Business Match returns any results, the business pairs are added to a table of potential duplicates.

Our User Operations team is responsible for going through pairs of businesses in the table and either merging them or marking them as not duplicates. However, the rate at which duplicates are added to the queue far outpaces the rate that humans can manually verify them which motivated us to develop a high-precision duplicate business classifier that would allow us to automatically merge duplicate pairs of businesses.

In order for our classifier to work, we needed to get thousands of instances of correctly labelled training data. For this, we sampled rows from our business duplicate table and created Crowdflower tasks to get crowdsourced labelings. We’ve launched public tasks as well as internal-only tasks for our User Operations team which let us easily create a gold dataset of thousands of accurately labelled business pairs. In the future, we are planning on trying an active learning approach where only data that our classifier scores with low confidence is sent to Crowdflower, which would minimize the amount of necessary human effort and allow our classifier to reach a high accuracy with a minimal number of training instances.

Our classifier takes as input a pair of businesses and generates features based on analyzing and comparing the business fields. It uses the same model (scikit_learn’s Random Forests) and many of the same basic features as Business Match like geographical distance, synonym-aware field matching, and edit distance / Jaccard similarity on text fields. In order to capture the kinds of false positives described earlier, we also added two intermediate classifiers whose output was used as features for the final classifier.

We created a named entity recognizer to detect and label business names that indicate a person (e.g. lawyers, doctors, real estate agents) in order to detect the differences between a professional and their practice or two professionals working at the same practice. 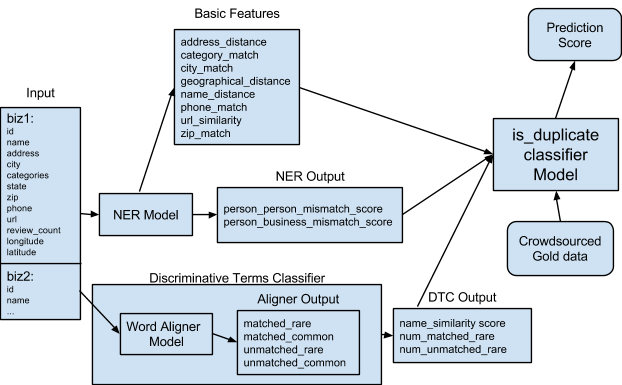 With the work done on our duplicate classifier and automatic business merging, we’ve been able to merge over 500,000 duplicate listings. However, there’s still room for improvements on deduplication. Some things slated for future work are: