iPhone vs. Android: What Does Your Phone Say About You?

It’s the battle of our generation - iPhone vs. Android - and Yelp has some novel data on what makes these devices different. Users of both are aligned in their passion of using Yelp to find restaurants as well as nightlife, plumbers and even dentists. However, when we dug into the search queries, some interesting differences were revealed - some stereotypical (brunch, Starbucks, cheap, luxury, whole foods/organic), some not so much (beer vs. wine, ramen vs. steaks). Regardless of the differences, we discovered some things for certain: everyone loves sushi, pizza, and delivery of all kinds!

Android Yelpers seem more interested in “nightlife” (ranked 11 on Android vs. 52 on iPhone), especially “dance clubs” (96 vs 156). On the other hand, iPhone users have a soft spot for brunch (rank 14 vs 26) and Starbucks (15 vs 30). As far as coffee chains go, they are also more interested in Peet’s Coffee (649 vs 1676). After the staple foods that are pizzas, sushi, and pho, iPhone Yelpers have a taste for ramen noodles (22 vs 28) while Android Yelpers favor steaks (25 vs 28). When dessert is considered, iPhone users enjoy ice cream (ranked 31) more so than Android ones (ranked 50). iPhone Yelpers are also looking for Whole Foods grocery stores more often than Android ones (159 vs 660 for “whole foods market”, and 166 vs 421 for “whole foods”): this is perhaps not surprising as they also search for organic food more often (621 vs 911). 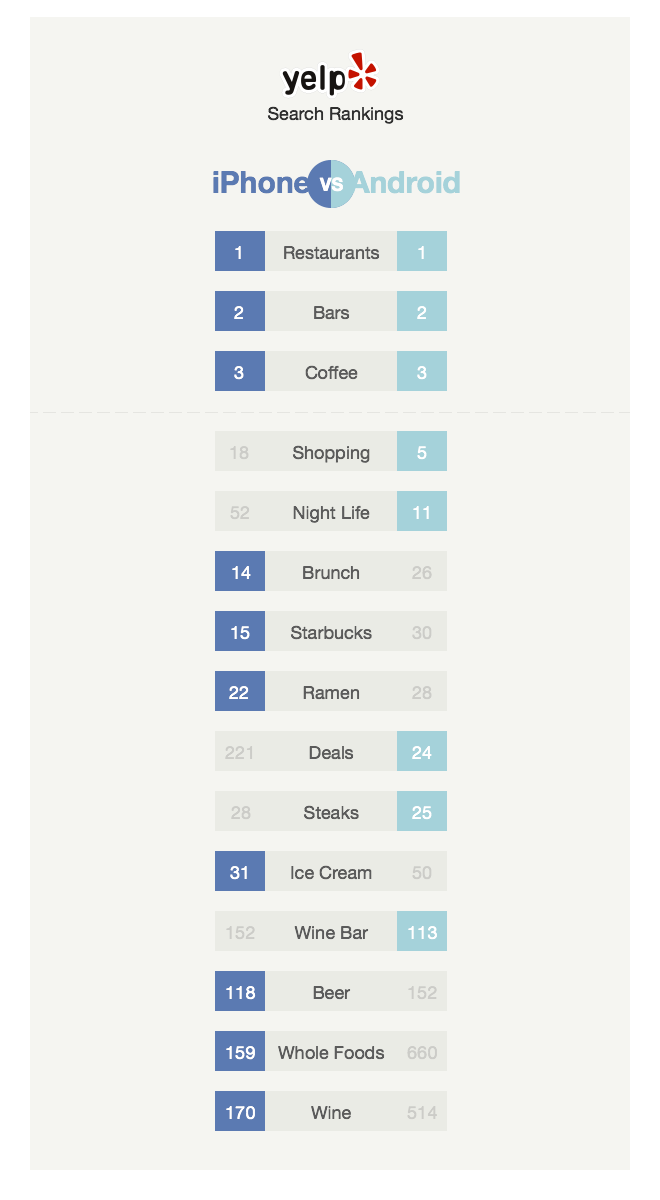 Thanks to Travis Brooks and Alexa Herasimchuk

Become a Data Scientist at Yelp

Looking at the differences between iPhone vs. Android users is only scratching the surface. If you're interested in digging into more of our data, apply to become a Data Scientist at Yelp.