TTL as a Service: Automatic Revocation of Stale Privileges

The Principle of Least Privilege exists to balance both security and usability by giving users only the minimum amount of access they need to do their job. This reduces the attack surface by preventing attackers from leveraging a compromised user’s important, albeit unused, privileges for vertical/horizontal escalation.

That said, there are a few key reasons why least privilege is hard to enforce:

To address this issue, we designed “TTL-as-a-Service” (Time-To-Live): a system to identify and flag users and their stale privileges. The premise is simple: if you haven’t used your access in X days, you probably don’t need it anymore and won’t notice if we take it away.

At its core, this requires two things:

Embracing the UNIX philosophy of portability and minimalism, this system is designed to simply ingest logs, then perform a daily scan to process and identify stale privileges. Upon detecting staleness, it will fire off an alert to execute custom integrations or automatically generate tickets to revoke the identified user’s stale privilege.

The architectural diagram below provides a clearer image of our implementation: 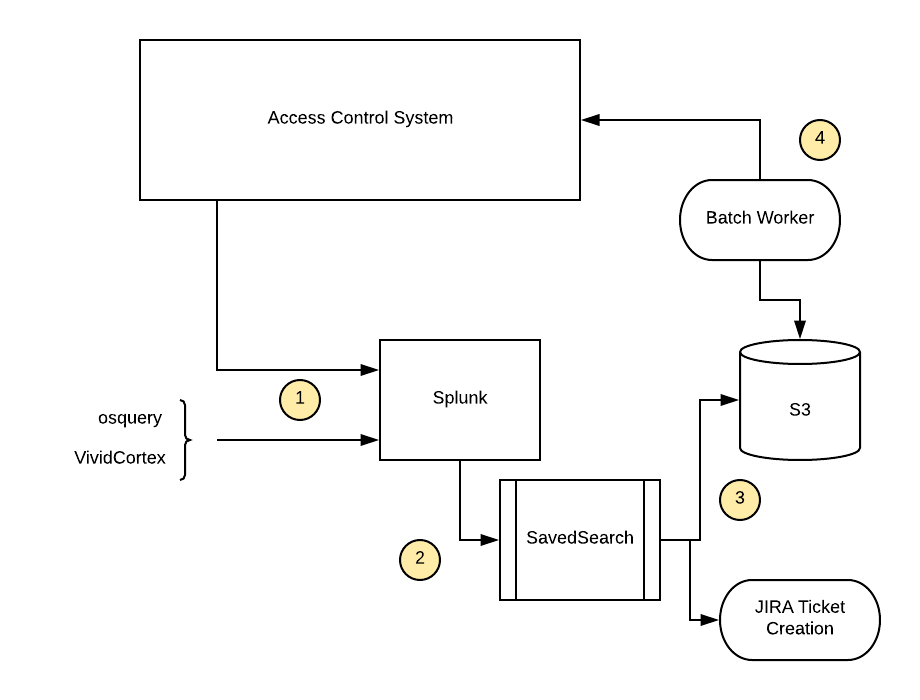 We use Splunk as both a log ingestor and alerting mechanism, powered by savedsearches.

This system can be easily applied to a variety of different access control systems by merely feeding the access log and receiving actionable alerts. These alerts can be further expanded through optional custom integrations that read from S3, and revoke privileges appropriately. Holistically, this allows us to assert that anyone with a given privilege has actively used it within the last X days.

The Cold Start issue occurs when a system has not processed enough data to make accurate judgements on an individual user level. In the case of least permissions, this occurs when a user is first granted new permissions, or when a permission is exercised infrequently or irregularly. How do we know when the right time is to remove a privilege with no prior knowledge of expected use cases?

To address cold start issues, we leverage anomaly detection techniques and try to bootstrap our knowledge of an individual by comparing their permission usage against the rest of their team and the company as a whole. For example, we attempted to identify “unusual” permissions by aggregating a given team’s permission set. If 95% of the team has a given permission, it would suggest they need it for their job. On the flipside, if only 1% of the team has a given permission, it might suggest an anomaly that should be more closely investigated.

With the additional assistance of on-the-ground managers to process and validate this data analysis, we’re able to answer the following questions:

Though we’re unable to completely avoid manual processing, this solution has helped ensure that we only have to do it once. For future potential improvements, we can also train a machine learning (ML) model to better improve the performance of our statistical analysis.

No project implementation is complete without a few hiccups along the way. Some edge cases to consider include:

The ability to quickly provision user access is important, especially for a high growth company. In the same way, it’s important to be able to quickly deprovision users when access is no longer needed. Unfortunately, the latter is a lot harder to manage and scale.

Using this system, we’re able to identify and subsequently revoke stale privileges without hindering developer velocity. This allows us to confidently assert that users will not have unused access longer than X days, thereby systematically enforcing least privilege with minimal manual effort.

Finally, through the process of building and rolling this out, we learned that it is also beneficial to have a smooth, speedy process in place for restoring revoked privileges, as it will reduce friction when trying to establish this new process.

I would like to credit the following people (in alphabetical order) for their hard work in building this system and in continuing to bolster Yelp’s security.