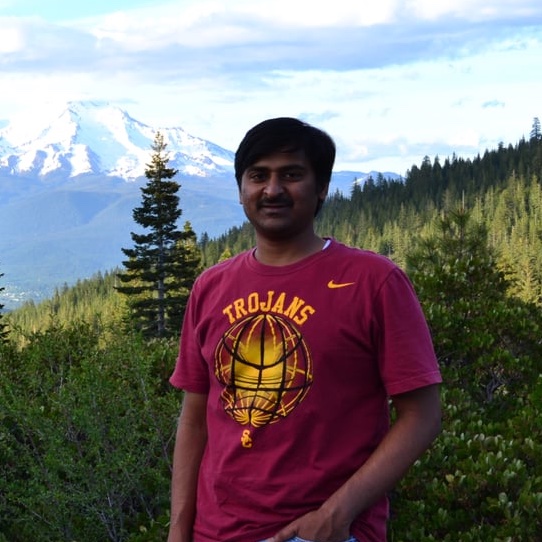 Yelp’s mission is to connect people with great local businesses. On the Recommendations & Discovery team, we sift through billions of users-business interactions to learn user preferences. Our solutions power several products across Yelp such as personalized push notifications, email engagement campaigns, the home feed, Collections and more. Here we discuss the generalized user to business recommendation model which is crucial to a lot of these applications. 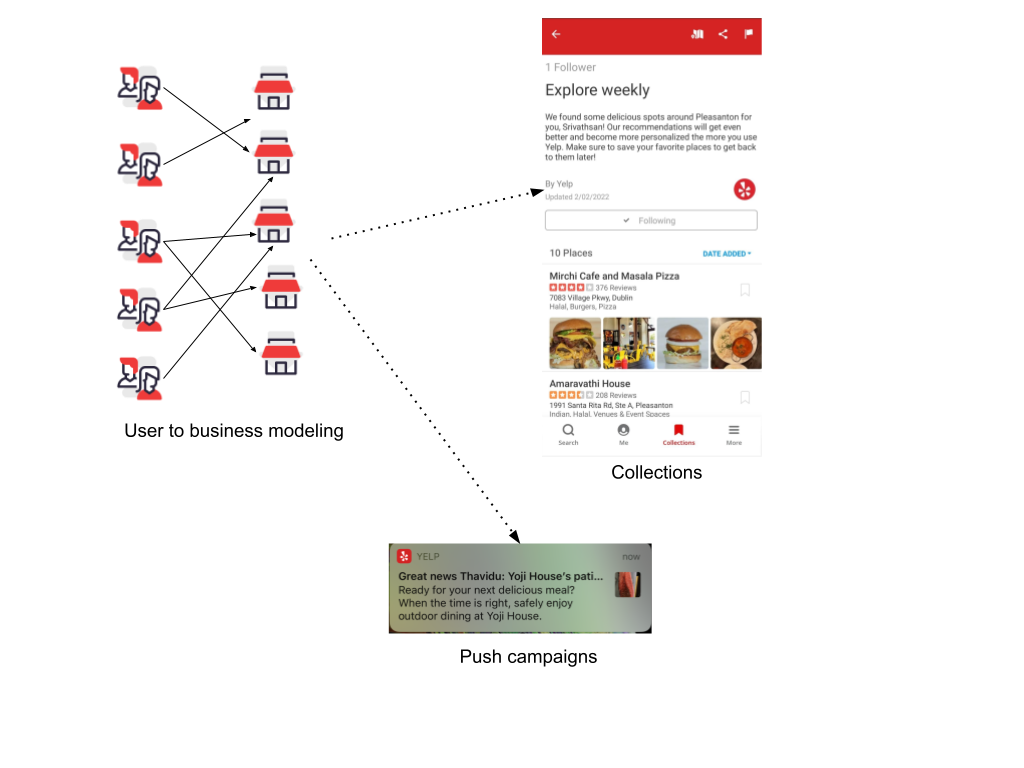 Our previous approach for user to business recommendation was based on Spark’s Alternating Least Squares (ALS) algorithm which factorized the user-business interaction matrix to user-vectors and business-vectors. By performing a dot-product on top of these vectors we are able to come up with top-k recommendations for each user. We explained the approach in detail in a prior blog - “Scaling Collaborative Filtering with PySpark”.

In this blog, we discuss how we switched from a collaborative filtering approach to a hybrid approach - which can handle multiple features and be trained on different objectives. The new approach doubled the number of users we could recommend for while also vastly improving performance for all users. The main takeaway here is that we were able to achieve these results pretty quickly by having a clearly defined objective and following a cost-efficient design which saved huge development costs for our initial Proof of Concept.

We start with discussing drawbacks of matrix factorization followed by some guidelines that shaped our approach. We later present the solution along with challenges and the improvements gained

Matrix factorization learns ID-level vectors for each user and business and requires a good number of user/business level interactions. This leads to a couple of major drawbacks:

Because of drawback #1, we identify two segments of users - head and tail.

The solution for drawbacks 1 and 2 is to use a hybrid approach which uses content-based features in addition to interaction features. In the evaluation section, we show how content and collaborative features could play different roles for these user types in a hybrid model which results in a better model performance.

In our initial exploration phase we considered approaches like Neural Collaborative Filtering, a Two tower model, a WideDeep model and GraphSage. Even though implementations for these approaches were readily available, we found them to be either hard to scale for our problem size or poorly performant when used off the shelf.

To be cost-efficient and gather early feedback, we took an iterative approach towards building a custom solution. We set the following guidelines to adhere to the iterative design:

We used a supervised learning to rank technique to combine both the content and collaborative approaches. The entire approach is summarized in the diagram below: 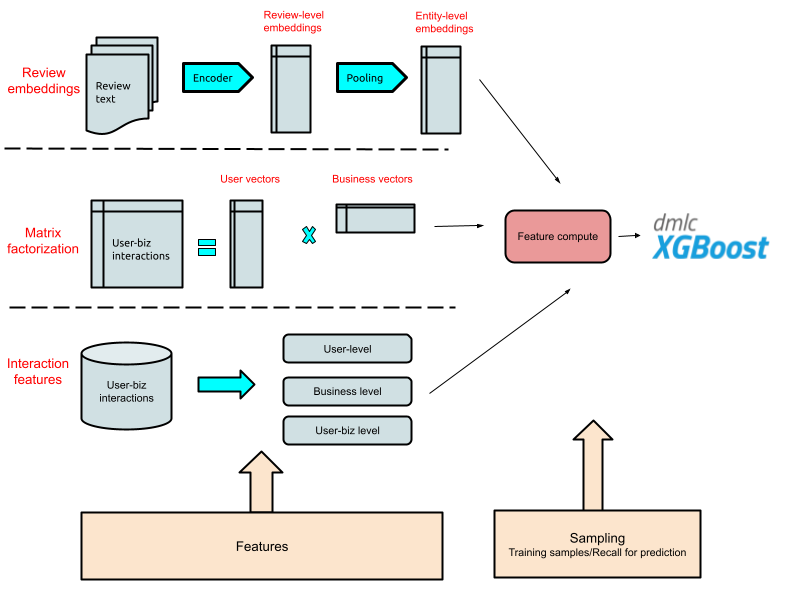 A diagram of our hybrid recommendation approach.

Similar to many other machine learning projects, we anticipated feature engineering to play a key role. Hence, most of our effort went into building a good set of features for the model to learn from. Features were extracted at the user-business level for a specific date which marks the end of the feature period.

The set of features can be categorized into two major buckets:

With all these features, we need an objective to optimize for which is discussed below.

As we aimed to come up with a personalized ranked order of businesses, we used Normalized Discounted Cumulative Gain (NDCG) as our primary metric. The relevance level for NDCG was defined based on the strength of interaction between a user and a business. For example, the gain from business views could be 1.0 as it’s a low-intent interaction whereas bookmarks could be 2.0 as it is a stronger-intent interaction. To ensure there isn’t any label leakage, we made sure there is a clear separation between the time-period where features and labels were generated from.

To optimize for NDCG, we relied on XGBoost’s rank:ndcg objective which internally uses the LambdaMART approach. One thing that’s worth mentioning here is how we defined “groups” for the ranking task. XGBoost uses the group information to construct a pairwise loss where two training rows from the same group are compared against each other. Since our objective was to get personalized recommendations based on where the user is located, we defined our group based on both user and location. We use the same definition of groups when evaluating our models.

Since we are using supervised learning, our model will be most effective if it has both positive and negative interaction examples to learn from. For the hybrid user-business model, we don’t have negatives as most of the implicit user-business interactions (e.g. get directions, visit the website, order food, etc.) are positive. Deriving an implicit negative interaction like a user viewing but not interacting with a business is tricky and can be heavily biased as it depends on what businesses were shown to them (sample bias), how it was shown to them (presentation bias), and so forth. Handling these biases are usually product specific (e.g. the presentation biases for search vs. recommendation could be very different) which makes it harder to build a generalized user to business model. A more generalized approach for negative sampling would be to consider all non-interacted businesses as negatives. In fact, some of the common techniques to fetch negatives involve subsampling the non-positive candidates either randomly or based on popularity (refer word2vec negative sampling).

We take a generalized approach to negative sampling but we also introduce a recall-step. Candidate businesses are recalled using a specific selection criteria like user preferences, location radius, etc., and only the recalled candidates are used to train the model. Candidates can be labeled as either positive or negative based on whether these had future interactions. This approach worked well for our use case for couple of reasons:

During training, we used a special type of recall that allowed the model to learn generic preferences instead of being very application specific. Users were associated with a sampled set of locations from their past history and a user’s top-k businesses for the locations were recalled using matrix factorization scores or business popularity. We downsampled the user, location pairs and businesses to make the training data size manageable.

Prediction is an intensive job where we need to identify top-k recommendations for tens of millions of users and businesses. When using the matrix factorization based approach we scaled the naive approach of evaluating all pairs of dot products using numpy BLAS optimizations and a file-based broadcast on Pyspark. We couldn’t use the same approach here as both feature computation and XGBoost model evaluation are more expensive than just doing a dot-product.

To speed up prediction we added a recall step based on the downstream product application. These applications restrict recommendation candidates based on the following criteria:

To prove to ourselves the hybrid approach works better, we evaluated the models offline based on historical data. We also evaluated the model subjectively by running a survey among a few Yelp employees who were tasked to rate recommendation rankings from different approaches. Both these evaluations suggested that the new hybrid approach performs much better than the baseline approaches. Here, we share these metrics based results.

Since this is a ranking task, we chose Normalized Discounted Cumulative Gain (NDCG) and Mean average precision (MAP) as metrics. The hybrid approach was compared against a couple of baselines:

In order to mimic production settings using historical data, we created test sets which are in the future of the model’s training period (i.e. both feature generation period and label period were shifted into the future for the test set).

At first, we look at the relative improvement from the business popularity baseline at different values of rank (i.e. rank k=1, 3, 5, 10, 20, 30, .., 100). We find that the model more than doubles the NDCG and MAP metrics compared to a “locally popular” baseline at k=1!

When comparing with the matrix factorization baseline, the improvement at different ranks (k) roughly ranges between 5-14% for NDCG and 10-13% for MAP.

Relative percentage improvement of hybrid approach vs. the matrix factorization baseline. We see positive improvements overall. At k=100 and user_type=head we see an improvement of 5% in the NDCG metric and 9.8% improvement in the MAP metric.

To perform this analysis, we picked representative features for content and collaborative signals. Review text based similarity and matrix factorization score were the top features in the model and it made sense to pick these as representative features. We use Partial Dependence plots (PDPs) against these features which shows the average prediction on the entire dataset when a feature is set to a particular value. 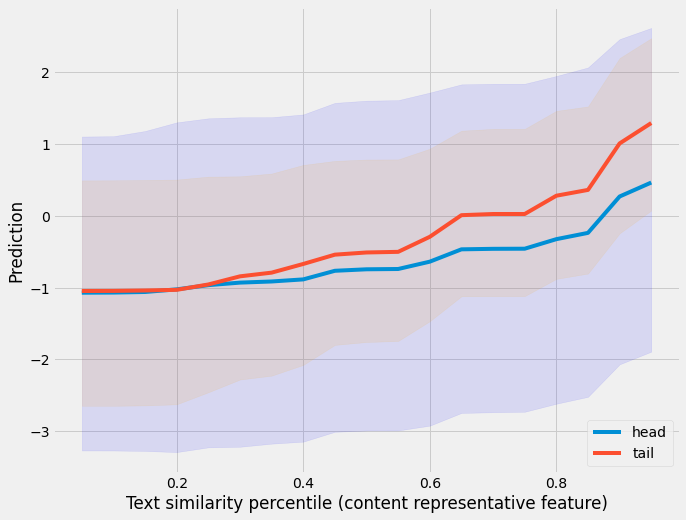 Partial dependence plot (PDPs) with content similarity percentile on x-axis and average prediction on the y-axis. We plot the PDPs for head vs. tail users separately. The plot shows a stronger relation for tail users.

Since matrix factorization scores are available only for head users, we plot PDP against collaborative vs. content for only head users. The plot below shows percentiles of content or collaborative features on the x-axis and average and spread of predictions on the y-axis. 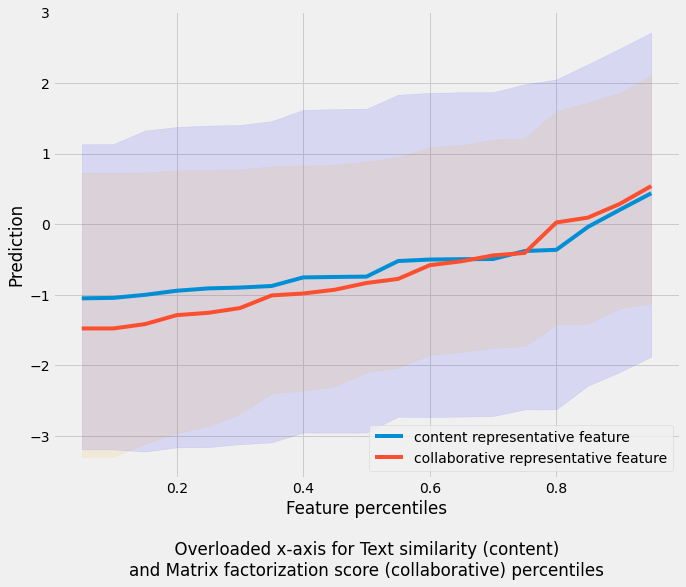 Partial dependence plot (PDPs) against feature percentiles. We overload the x-axis with percentiles from two features and plot two PDPs in the same plot - text similarity feature (content) and matrix factorization score (collaborative). The confidence spread shows a stronger relation for the collaborative feature as the spread narrows at higher percentiles.

We see that both the content and collaborative features are strongly related to the user business relevance prediction, which means that both features are used effectively in the hybrid model. The collaborative feature has a stronger relationship as the prediction spread narrows at higher percentiles. This suggests that head users have a detailed enough browsing history that lets us learn user specific preferences, for example that a user is vegetarian but doesn’t particularly like Thai food.

The above plots confirm our initial thoughts of how content and collaborative features can play different roles for different user types in the hybrid model.

Switching to a hybrid approach was a major change in our user to business recommendation system. In this blog, we documented our journey in developing this new approach and are glad to see big improvements. We plan to run several additional A/B experiments for push notification and email notification campaigns to confirm that these improvements translate to better user experiences. Given the current infrastructure, we feel more confident to try more complex models based on neural networks.

If you are inspired by recommender systems, please check out the careers page!

This blog was a team effort. I would like to thank Blake Larkin, Megan Li, Kayla Lee, Ting Yang, Thavidu Ranatunga, Eric Hernandez, Jonathan Budning, Kyle Chua, Steven Chu and Sanket Sharma for their review and suggestions. Special thanks to Parthasarathy Gopavarapu for working on generating text-based embeddings.

Become an ML Engineer at Yelp